Melbourne-born James Mallett (Jim) Bennett was five years younger than fellow Vimy mechanic Wally Shiers and only 25 at time of the epic flight.

Born on 14 January 1894 at St Kilda, Jim was the third child (and only son) of tick-maker James Thomas Bennett his wife Henrietta Augusta, née McKendrick.

Not a lot is known about his early childhood, however Melbourne’s Age newspaper reported on 13 March 1909 that a 15-year-old boy by the name of James Mallett Bennett was missing from his Hawthorn home. It noted that “ships had a strong attraction for him”. Subsequent reports – including an interview with his sister Brenda in the wake of Jim Bennett’s death in 1922 – reveal he’d stowed away on a ship to Fremantle in a bid to get out of his apprenticeship with printing firm Sands and McDougall. Far from being angry, Jim’s father at first asked the ship’s captain to take good care of his son, and when Jim returned home his father helped him to secure a motor mechanic traineeship at a local garage. In 1912 he joined the militia and served for three years with the 49th Battalion.

An article in Britain’s Flight magazine on 6 November 1919, just before the epic flight, noted that Jim spent 14 years of his early life at Hawthorn, Melbourne, “where he received a public school education, and attended night technical classes”.

“He took great interest in all things connected with the early progress of the internal combustion engine,” according to the Flight article, “both for car and aviation use, received a thorough and early training with Salway motor engineers, and was employed for a considerable time with other prominent motor firms in Australia. At the outbreak of war in 1914, he was on the mechanical staff of Messrs. Denny Lascells, Motor Department, Melbourne, but enlisted in the Mechanical Transport, Australian Imperial Forces…”

According to his entry in the Australian Dictionary of Biography, Jim enlisted in the AIF on 14 July 1915 and the following year was posted as a mechanic with the Australian Flying Corps. “On arrival in Egypt in mid-April, the squadron’s mechanics were split up into several parties and assigned to British units for training,” the entry states. “Bennett joined No. 14 Squadron, Royal Flying Corps, and trained as a fitter and turner. After returning to his own unit he was promoted Corporal on 24 August.” Later in 1916 he began duty with No. 1 Squadron, Australian Flying Corps (where he met Ross Smith and Wally Shiers) and was promoted Sergeant in March 1918. Jim was mentioned in dispatches soon afterwards and was later awarded the Meritorious Service Medal for distinguished service as an air mechanic.

When the war ended, Ross Smith was invited by the two highest ranking Royal Flying Corps officials in the Middle East – Major General W.G.H Salmond and Brigadier General Amyas “Biffy” Borton – on a long-range survey mission in the Handley Page from Cairo to Calcutta. Ross chose Jim and Wally Shiers as the mechanics to accompany him on what was to become the longest endurance flight in the world up to that time. For their efforts in maintaining the huge engines and manually refilling the 1000-litre fuel tanks, both men were awarded the Air Force Medal.

During their time in India, Jim and Wally Shiers were briefly attached to 31 Squadron (RAF) to oversee the rigging of aircraft flown in the 3rd Afghanistan Campaign on the North West Frontier. The men were still out East when they learned about the  Great Air Race from England to Australia. Not surprisingly, when Ross Smith jumped on a ship to London to enter the race, he took his two highly experienced air mechanics with him.

During the epic flight from England to Australia, the role of the Vickers Vimy mechanics was pivotal. Despite rapid advances in WWI, aircraft were still incredibly rudimentary: made of wood, wire and fabric; open cockpits; little more than a compass for navigation. With no support crew, and indeed very few airfields after India, the mechanics often worked all night under spotlights in all extremes of temperature. Jim was responsible for the starboard engine and Wally Shiers the port engine. The Vimy wasn’t once under cover, and more often than not the mechanics slept with the aircraft. When the plane was in the air, for up to nine hours at a time, they were squeezed into the back cockpit with their tools and spare parts.

Jim proved his worth many times over during the epic flight from England to Australia. In Pisa he ran beside the Vimy’s fuselage, holding down the tail wing while Ross Smith taxied over the waterlogged airfield, before jumping into the back cockpit as the plane left the ground. In Singapore, he scrambled out of the back cockpit and shimmied down the fuselage to the tail wing to bring the Vimy to an abrupt halt on a tiny racecourse that had been turned into a makeshift landing site.

He really came into his own on the first leg of their journey around the Australian continent from Darwin to Adelaide. They were flying over the Northern Territory desert on day two out of Darwin when they heard a loud crack as an entire blade of the port propeller split from the tip to the centre. Over three days in 50-degree heat that melted the men’s goggles and the Vimy’s windscreens, Jim carried out what Ross Smith later called “a unique piece of skilled workmanship” on the split propeller. He glued tiny bits of wood from an old packing case into the crack and then cut inch-wide strips of galvanised iron to bind around the blade. Screws were taken from the floorboards of the Vimy to fasten the iron into place. The opposite blade was treated in exactly the same manner to avoid vibration.

You’ll learn lots more about the mechanics’ ingenuity in our timeline.

Ross Smith knew better than anyone how crucial Wally and Jim Bennett’s role had been, and later wrote that his “master mechanics” shared equally in the worthiness of the first flight across the world. In fact, the last words of his memoir 14,000 Miles Through The Air read: “Their loyalty and devotion to duty have done much to bind closer the outposts of the Empire through the trails of the skies.”

Following the epic flight, Jim was awarded a Bar to his Air Force Medal and promoted to Senior Warrant Officer, Class 1. Later in 1920 he was made an Honourary Lieutenant in the AIF Reserve of Officers.

Jim used his quarter share of the £10,000 Great Air Race prize money to open a garage on St Kilda Road, before being enticed back to England with Ross and Keith Smith for a bid to circumnavigate the globe. It was there that tragedy struck on 13 April 1922, with Jim losing his life alongside Ross Smith on a test flight of their Vickers Viking amphibious aircraft.

Just as one fifth of the South Australian population turned out for the funeral of Ross Smith, Melbournians also flocked to farewell a popular national hero. Tens of thousands paid their respects as his body lay in state in Queen’s Hall, Parliament House on Melbourne’s Spring Street (then the seat of federal parliament). At his memorial service it was said: “Sir Ross Smith and Lieutenant Bennett were martyrs in the conquest of the air. No men knew better the risks they ran, but cheerfully they were prepared to meet them. If they failed, they failed for all mankind.”

Jim was buried in St Kilda Cemetery on 19 June 1922. A memorial fund was opened, and five years later an obelisk in his honour was unveiled on the St Kilda Esplanade. His entire estate of £2787 was left to his father, and included real estate valued at £800. He’d used part of his £2500 share of the air race prize money to buy a garage in Melbourne.

In 2019, to coincide with the epic flight centenary, Jim and Wally Shiers were inducted into the Australian Aviation Hall of Fame at a ceremony at the Australian War Memorial in Canberra. Sir Ross and Sir Keith Smith were inaugural inductees in 2012. 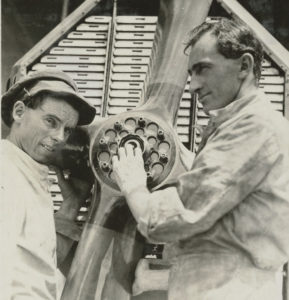 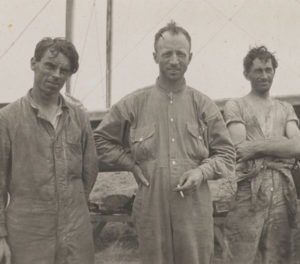 Ross Smith, Jim and Rex Pierson (Viking designer) in front of Viking amphibian at a factory in Weybridge, England. Smith and Bennett were later killed when this aircraft crashed. [SLSA PRG 18/13/4]

The wreck of the Vickers Viking near Weybridge, UK. Image courtesy of the South Australian Aviation Museum archives. Located on the Strand in London opposite Australia House, St Clement Danes Church is the central church of the Royal Air Force. A memorial was held here for Jim and Ross Smith on 20 April 1922. Thousands line the streets of Melbourne to honour Jim Bennett as his funeral cortege passes down Bourke St. The Argus, 19 June 1922