Mosquitos kept the Vimy crew awake until after sun-up, so take-off from Warlock Ponds was delayed until 10am. Disaster struck within a few hours, with Ross Smith startled by a loud crack from the propeller and “horrified to see that one blade had split from the tip to the boss”.

He landed “in a dry and desolate part of Australia”, and the crew was astonished when two cars soon drove out of the scrub to meet them. It was here at Cobb’s Creek, in scorching temperatures that melted their goggles and the Vimy’s little windshield, that Bennett carried out what Ross Smith later called “a unique piece of skilled workmanship” on the split propeller.

“When the propeller blade had split in the air several splinters of wood had flown off, but Bennett, nothing daunted, shaped new bits out of a piece of packing case to fill the gaps,” Ross wrote in 14,000 Miles through the Air.

“He next glued the split portions together, then cut the sheet of galvanized iron into strips and bound them round the blade. The strips of iron were fastened onto the blade with screws which we had taken out of the floor boards of the machine. When this was done the whole blade was covered with fabric and painted. So that there would be little or no vibration the opposite blade of the propeller had to be treated in exactly the same manner.”

Bennett’s port-side propeller had taken the force of the kite bird on take-off in Calcutta, India, which might have contributed to the cracking. It’s also likely both propellers (and indeed the entire aircraft) were feeling the wear and tear of tremendous climatic extremes over the past month.

The damaged propeller was discovered during the 2019 Epic Flight Centenary at RAAF Base Laverton in Victoria. The images below show Bennett’s workmanship in binding the blades with galvanized iron. 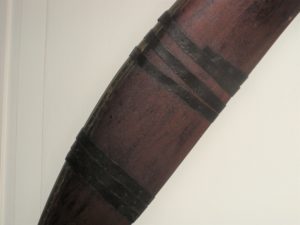