The Smith crew’s epic flight shows that anything is possible with visionary thinking, courage, hard work, determination and audacity. For children raised under the South Australian sun, the sky is no limit. 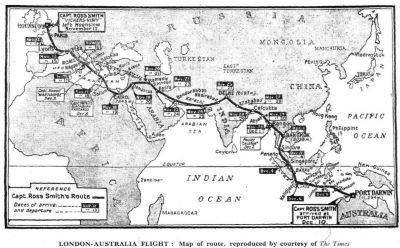 Click on the map to watch a one-minute video on the Smith brothers’ epic flight, which took place during the 1919 Great Air Race from England to Australia. With special thanks to the team at All Of Us Productions for creating these videos for the Epic Flight Centenary.

With the generous assistance of educators in the fields of History, HASS (Humanities and Social Sciences) and STEM (Science, Technology, Engineering and Maths), we’ve discovered where and how the epic flight (and flight more generally) can be studied within the Australian Curriculum. Click here to see our curriculum links.

In Term 3, 2019, we’re running a schools competition for South Australian students in year R-10 across all areas of interest. Sponsored by Boeing, the competition provides an opportunity to participate in research, and develop an understanding of these incredible aviators and their world-beating achievement.

Throughout 2019 we’ll be working to expand our learning resources and useful links to ensure students and researchers can find everything they need to explore and understand the story of the epic flight. Click here to be inspired! 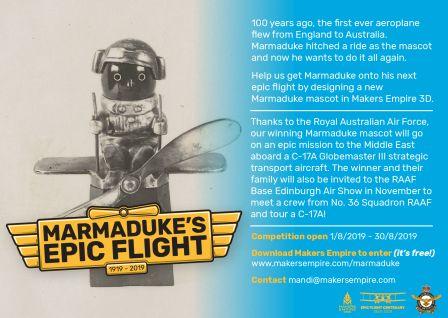 SA company Makers Empire teaches students to solve problems with creative thinking and 3D printing. In August 2019 they’re asking students to create a modern version of Marmaduke, the tiny pilot mascot who joined the Smith crew aboard the Vimy in 1919. Thanks to the RAAF, the winning Marmaduke will go on a trans-global mission to the Middle East aboard a C-17A Globemaster III aircraft. The winner will also be invited to the RAAF Base Edinburgh Air Show in November to meet a crew from No. 36 Squadron RAAF and tour a C-17A. For all the details please visit www.makersempire.com/marmaduke. 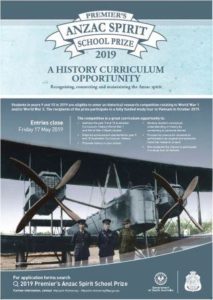 In recognition of the role of aviators in the Great War, the 2019 Premier’s Anzac Spirit School Prize poster displayed the picture of South Australian brothers Sir Ross and Sir Keith Smith and their crew. Behind them is their WWI Vickers Vimy biplane, in which they became the first men to fly from England to Australia in the 1919 Air Race. Sir Ross and mechanics Wally Shiers and Jim Bennett were members of the Australian Flying Corps in WWI. Sir Keith flew with Britain’s Royal Flying Corps in England.  After the Armistice the four men took on the challenge of the air race. This is just one of the many post-WWI stories that all South Australian should know. While still focussing on the sacrifices of WWI, the 2019 Premier’s Anzac Spirit School Prize for the first time invited students to consider the inter-war years leading to the events of WWII. The competition is now closed for 2019.