The Sir Ross and Sir Keith Smith War Memorial was officially unveiled at Adelaide Airport on 27 April 1958 by the father of the RAAF, Air Marshall Sir Richard Williams (who’d also been Ross Smith’s Commanding Officer in the Australian Flying Corps during WWI).

Sir Keith Smith had asked then Prime Minister Robert Menzies to relocate the plane to Adelaide when it was removed from display in the Australian War Memorial after WWII. The people of South Australia donated £30,000 to make it happen. 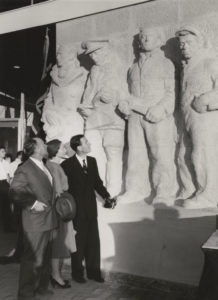 Lady Anita Smith and other dignitaries inspect John Dowie’s sculpture of the Vickers Vimy crew at Adelaide Airport in 1969, on the 50th anniversary of the epic flight. [SLSA PRG 18/56/102]