Ross Smith made a 7.40am start from Karachi, circling above the desert aerodrome before turning the Vickers Vimy east towards Delhi, “heading straight into the golden sun that was just rising above the horizon”.

The nine-hour, 720-mile flight was the equal longest of the epic journey to Australia, with Ross Smith battling “boisterous” atmosphere that “tossed the Vimy about like a small vessel in a heavy sea”.

They spotted Delhi from 50 miles away, but by the time they landed Ross was quite deaf from the roar of the exhausts, and unable to hear the speeches of the welcoming dignitaries.

“After several hours my hearing returned, and it was to learn that Poulet had left the same morning for Allahabad,” Ross wrote in 14,000 Miles Through The Air,  now reprinted by Wakefield Press as Flight to Fame. “Great excitement prevailed. Half the journey was completed and Poulet was within range.”

The following day, 26 November, the exhausted Vickers Vimy crew stayed put at the RAF aerodrome in Delhi to work on the engines and rest up for the last half of their epic flight to Australia. Ahead lay vast areas of ‘unflown skies’ and makeshift aerodromes where they’d be forced to land on racecourses, golf courses and hastily cleared jungle.

Below is an aerial view of Delhi’s Connaught Place taken from the air by Keith Smith. SLSA PRG 18/9/1/20D 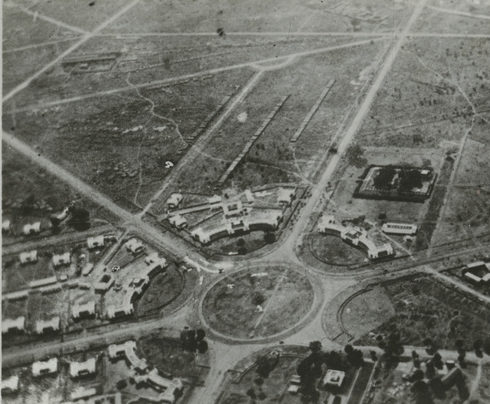