South Australian brothers Ross and Keith Smith, with their mechanics Wally Shiers and Jim Bennett, enter the history books as the first men to fly from England to Australia.

The final leg of their epic 28-day journey began at 8.35am in Atamboea (Timor), with gum trees scraping along the bottom of the Vickers Vimy as Ross Smith took off from the small aerodrome.

Knowing they had a great deal of sea to cross, the crew had tied a parcel of food, a bottle of water, Ross’s Very pistol and some cartridges to the Vimy’s tail so they’d have something to fall back on in case of emergency. “All our hearts were beating a little quicker, even our fine old engines seemed to throb a trifle faster,” Ross later wrote.

At 11.48am they spotted a plume of smoke from the HMAS Sydney, which had been ordered to patrol the sea between Timor and Port Darwin in case the Vimy crew needed assistance. Ross flew low and Keith dropped a hastily-written message of thanks in pickle jar with a little parachute.

At 3.05pm, according to Sir Ross Smith’s log book now held at the State Library of South Australia, they landed on “Terra Australis” – 27 days and 20 hours after taking off from Hounslow. “We had won the race against time and the £10,000 prize with just 52 hours to spare.”

The men were carried on the shoulders of the waiting throng to the front porch of the Fannie Bay Gaol for speeches, before being escorted to Darwin’s Government House “to be bewildered by an amazing array of cables and telegrams”.

“They arrived at great fifteen-minute shoals from every corner of the globe,” Ross wrote. “What had gone wrong? Surely everyone had gone mad – or had we? Why all this fuss and excitement?”

Among the telegrams was a message from King George V: “Delighted at your safe arrival. Your success will bring Australia nearer to the Mother Country, and I warmly congratulate you and your crew.”

Australian Prime Minister Billy Hughes wrote: “You have … proved that with relays of machines and men, Europe can be brought within 12 or 15 days of Australia.”

On the other side of the world, The New York Times hailed Ross Smith as “the world’s foremost living aviator”.

And in Adelaide, the news was received via cable in The Advertiser building at 4.40pm and copies of The Express were selling on the streets with the news just one minute later. The news was also immediately transmitted to the Lord Mayor, and a “merry peal was rung from the Town Hall bells in honour of the marvellous feat performed by the gallant young Adelaide aviators”. The HMAS Sydney captured from on board the Vimy on 10 December 1919. Keith Smith’s message in a pickle jar, dropped over the side of the Vimy with a little parachute and retrieved by the crew of the HMAS Sydney. Now held by the State Library of NSW. 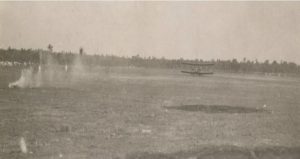 Coverage of the landing in The Advertiser on 11 December 1919. Source: Trove.