Ross Smith landed in Calcutta at 1.30pm after a relatively easy five-hour flight from Allahabad, only to learn that “the elusive Poulet” had left the Indian city that same morning. Thousands of Calcutta citizens crowded onto the racecourse to see the Vimy crew, and were kept behind barriers by police. With more than half their epic flight complete, and 4,000 or so miles left to go, there was concern that if any further complications arose, they would be unable to land in the jungle to make repairs.

The Statesman newspaper clippings below were photographed by Lainie Anderson on her Churchill Fellowship retracing the epic flight route in 2017. The third photo shows the Vimy arriving in Calcutta in 1919 and is held in the State Library of SA collection. [PRG 18/9/1/24B]. 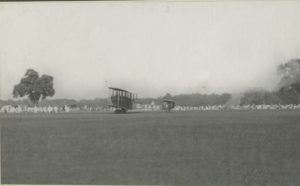