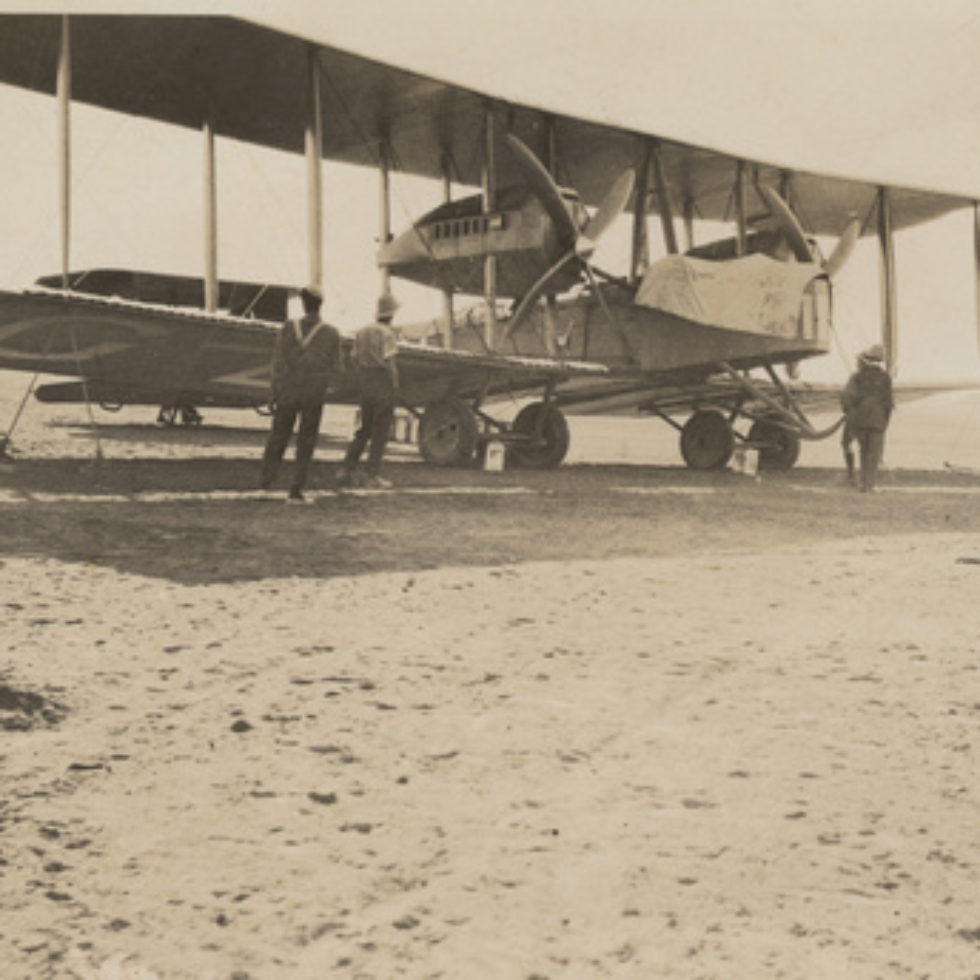 The Smith crew repaired the Vimy’s ailerons and wires after the night’s raging sandstorm before setting off at 1.15pm on a 350-mile flight to Basra.

Maintenance facilities were pretty fair at the local RAF base, so Ross Smith decided they’d stay put on 22 November to allow Wally Shiers and Jim Bennett to work on the engines. As Ross Smith explains in 14,000 Miles Through The Air, reprinted as Flight To Fame, there was always plenty to do on the ground… Photo taken from the Vimy by Keith Smith, showing the British camp at Basra on the right of the the Shatt-el-Arab River. SLSA PRG 18/9/1/16F

“Both of the engines had to be overhauled and cleaned, all parts of the machine examined and petrol and oil tanks refilled for the next journey. Usually this took us three or four hours every day. We adopted a set program which we always carried out religiously.

“As soon as the machine landed Bennett and Shiers would don their overalls and set to work on the engines. Keith and I would climb out of our seats and talk to the people who had come out to meet us. Presently Keith would make enquiries about our petrol and oil supplies and get them brought up to the Vimy. I would then go off to the nearest post office and send our cables and get back to the Vimy as soon as I could.

“By the time I returned to the machine Keith would have the petrol ready to put into the tanks and we would start to work. This was very tiring and monotonous. I would open the four-gallon cans and lift them up to my brother, a distance of about six feet, and he would empty the cans into the tanks through a large funnel with a chamois leather strainer. Usually we lifted and filtered about half a ton of petrol into the machine and sometimes as much as a ton if we had just completed a long flight. I have always regarded this work as the hardest part of the whole flight.”

Meanwhile, back in England on 21 November, George Hubert Wilkins and the Blackburn Kangaroo crew left Hounslow in the Great Air Race from England to Australia.

Born at Mt Bryan in South Australia’s mid-north, Wilkins had served as an official photographer during WWI, and had twice won the Military Cross for putting down his camera and assuming leadership of troops who’d been wounded or had lost all their commanding officers. Later in life, Wilkins would go on to become one of the world’s leading polar explorers, and one of his main reasons for taking part in the Great Air Race was to carry out scientific experiments in the air across differing climatic zones.

The unlikely-looking Blackburn Kangaroo, pictured below and sourced from Flight magazine, was piloted by Valdemar Rendle, with David (Reg) Williams and Garnsey Potts completing the four-man crew.