Ross Smith departed Delhi at 10.20am, feeling “the keenness of the chase” to overtake French aviator and rogue air race competitor Etienne Poulet. After briefly touching the Vickers Vimy down in Muttra to check on a faulty oil guage, Smith set course for Agra and the Taj Mahal.

“Of all the remembered scenes, wonderful and beautiful, that of the Taj Mahal remains the most vivid and the most exquisite,” he wrote later in 14,000 Miles Through the Air. “We hovered lazily around, exposed our photographic plates, and swung off on our course.”

After a 4.5-hour flight (the 13th leg of the epic journey to Australia), they reached Allahabad and “eagerly but vainly searched the aerodrome for a glimpse of Poulet”. Alas, the Frenchman’s Caudron G4 wasn’t in any of the undercover hangars either. Poulet and his mechanic Jean Benoist were by now in Calcutta (as you can see from the photo below from the city’s Statesman newspaper) and suddenly just one day ahead. In Allahabad they also encountered a large black bull that challenged them, threatening to charge the aircraft.

The photo of the Taj Mahal below was taken at 3000ft, possibly by Jim Bennett given the little strip of wing you can see on the right (Jim sat on the port side in the aft cockpit, located just behind the wing). The image can be found among a fantastic collection of air race photos in State Library of South Australia. [PRG+18/9/1/1A-48C] 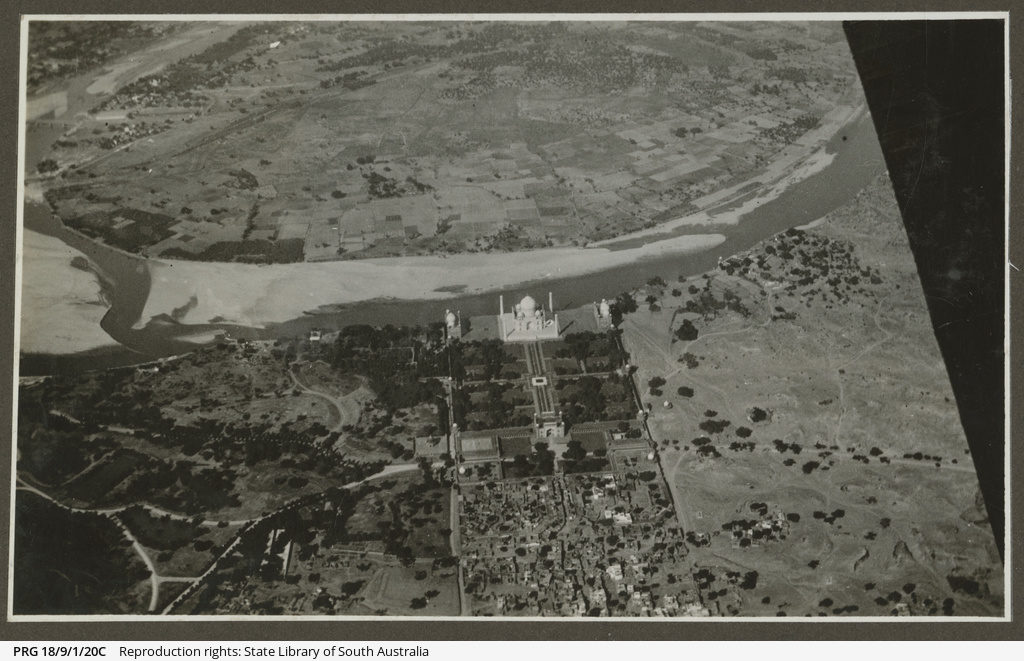