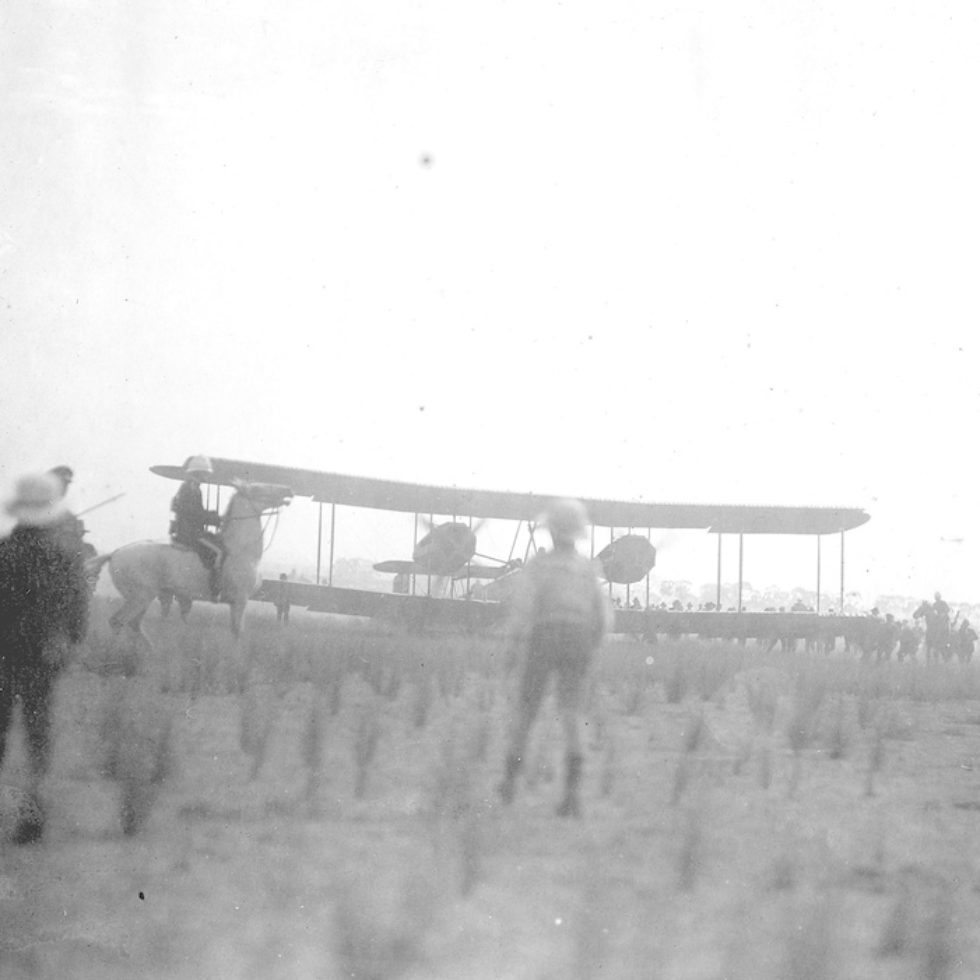 After nearly a month in Melbourne, the Vimy left on the last leg to Adelaide. All four crew were aboard, plus Frank Hurley in the nose gunner’s cockpit. Only a small group was on hand at Pt Cook to see them off, including Jim’s father and sisters Muriel and Brenda.

They departed at 7.30am, following the railway line so as to pass over as many towns as possible (and circled many to wave to the crowds) and were sighted around 1.35pm above Mt Lofty. “Suddenly guns boomed out successively, whistles screamed their exultant notes, the bells at Town Hall rang happily, and the last link between the British Australian journey had been forged.”

They were over the city by 1.55pm and flew around the suburbs including over the Smith home at Walkerville and Ross’s friend Peter Waite’s house at Urrbrae, then landed on schedule at Northfield about 2.30pm. This established yet another record for the Vimy: the first non-stop flight from Melbourne to Adelaide. They were supposed to circle Port Adelaide but didn’t, much to the disappointment of the waiting crowds there.

The Butler-Kauper aerodrome at Northfield had been selected because the authorities felt it was far enough from the city for the crowds to be manageable. However, 15,000-20,000 people still turned up, many of whom had walked three miles from the tram terminus.

Harry Butler took off from the Northfield aerodrome in his Red Devil to escort the Vimy in from Mt Lofty, together with Capt Moore in a DH6 and Capt Loftus in a Sopwith Dove from their Glenelg field, but Harry missed the Vimy in cloud and landed well after the arrival.

Ross did a “touch-and-go” after misjudging the field’s slope, and as soon as he touched down the second time the crowd broke the police/army cordon and surged onto the field. Ross and Keith were furious and refused to disembark while the crowd was “… tearing our machine to bits”, even at the urging of the Premier and welcoming committee. Eventually the men did climb down and were carried shoulder-high to the waiting motorcade that was to take them to the official welcome at Parliament House. Jim and Wally never made it. They were lost in the crowd and presumably they stayed at Northfield trying to protect the aircraft.

The image top left shows the Vimy touching down in Adelaide and is one of many held in the State Library of South Australia’s digital collection. [SLSA PRG 280/1/36/293]. For more photographs of the Adelaide landing held in private family collections across South Australia, check out our collections page.