Many daring aviators have retraced the England-Australia route of the Vickers Vimy since 1919 – from competitors in the MacRobertson race in 1934, to Australian adventurer Michael Smith in 2019.

Australian confectionary giant Sir Macpherson Robertson offered a prize pool of £15,000 for competitors in the 1934 MacRobertson Centenary Air Race from Mildenhall (near London) to Melbourne. The race formed part of Melbourne’s centenary celebrations but also marked 25 years since the epic flight and included five compulsory stops where the Vickers Vimy touched down: Baghdad, Allahabad, Singapore, Darwin and Charleville. Twenty crews took part from seven countries, with 11 aircraft completing the gruelling journey. South Australia’s dashing young aviator Jimmy Melrose was among those to make it home, finishing second in the handicap division. You can watch a video of the race on YouTube. 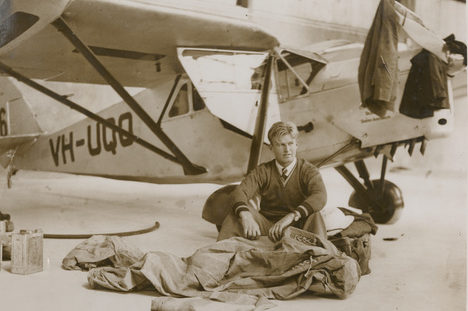 Jimmy Melrose, the popular Adelaide aviator and youngest competitor in the 1934 race from England to Australia. [SLSA PRG 995/23/8]

The 1969 London  to Sydney Air Race commemorated the 50th anniversary of the epic flight and the bicentenary of Captain James Cook’s discovery of Australia’s east coast, with nearly 200 competitors from 16 nations taking off from Gatwick on 17 December. The New York Times reported that on the final day of the $112,000 race, 59 planes (mostly light aircraft) landed within an hour at Sydney’s Bankstown Airport. You can watch archival vision of the race on YouTube.

The 50th anniversary was also celebrated with philatelic mail from England and many countries along the route of the epic flight, with Great Britain, Iraq, Iran, Pakistan, Indonesia, Portuguese Timor and Australia among those releasing commemorative stamps. The Australian Air Mail Society chartered a TAA DC3 to fly the mail from Singapore to Melbourne. On board was Reg Williams, co-pilot of the Blackburn Kangaroo aircraft which took part in the 1919 Great Air Race. In 1994, Australian adventurer Lang Kidby and American Peter McMillan built a replica Vimy before flying the aircraft from London to Darwin. Lang, pictured top left, later described the aircraft as a “dog of a plane to fly”, with the two propellers spinning very close to the cockpit and setting up pressure waves. “It was like having someone drumming their fingertips on the top of your head. After nine hours of that, it was like torture.” The replica Vimy, pictured below, can today be found at Brooklands Museum in Weybridge, UK, where the original Vimy was built and where the Smith crew also prepared for their epic flight. The 1994 Vimy is one of only two replicas in existence – the other is housed at the Royal Air Force Museum in Hendon, London. You can see vision of the replica Vimy on YouTube. 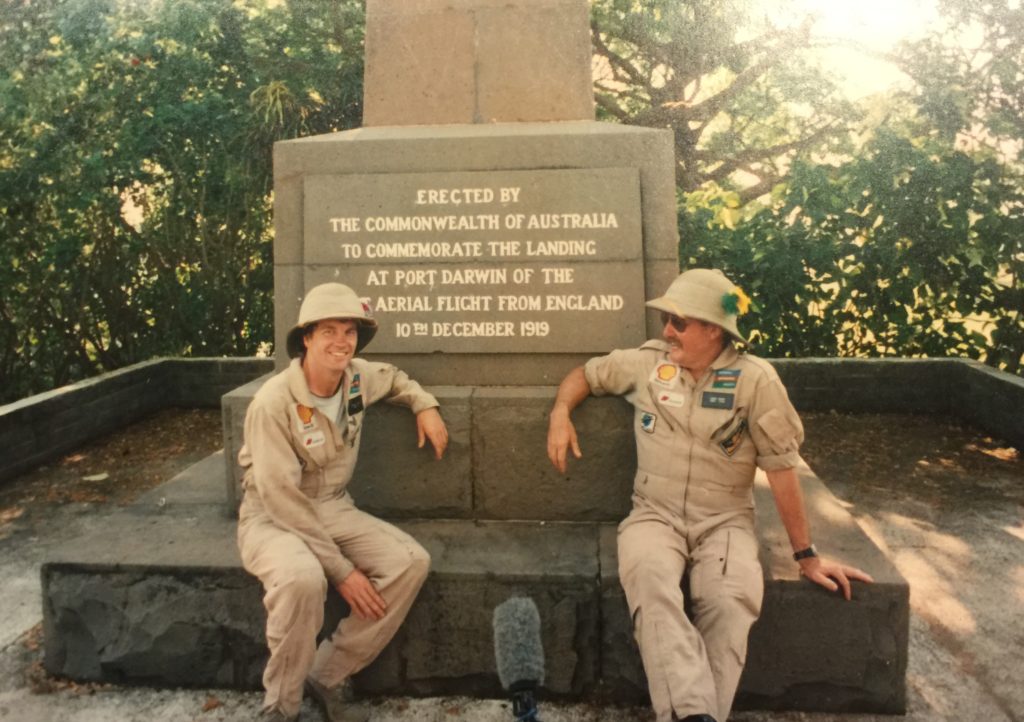 Peter McMillan and Lang Kidby in Darwin in 1994.

Australian adventurer Michael Smith, below centre, re-enacted the flight from London to Australia in late 2019. His Southern Sun amphibious aircraft landed in Darwin on 10 December at 3.45pm, exactly 100 years after the Vickers Vimy touched down. Michael, named Australian Geographic’s Adventurer of the Year in 2016 after his solo circumnavigation of the globe, also took part in the re-enactment flight from Darwin to Adelaide coordinated by Tom Lockley from the Aviation Historical Society of Australia (NSW). The group, pictured below, arrived in Adelaide in March 2020 to celebrate the centenary of the Smith brothers’ victorious homecoming to South Australia. 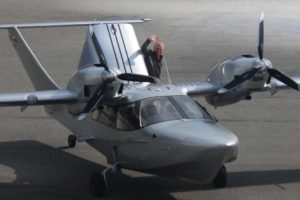 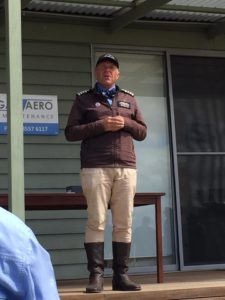 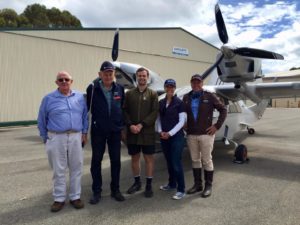