Since 1919, the epic flight has inspired place names, street names and memorial parks across Australia – and even the architecture of a small private school in the inner northern suburbs of Adelaide. For a comprehensive look at statues and memorials built in honour of the Vimy crew, please check out our Collections section.

A civilian aerodrome was established at Parap, Port Darwin, for any aircraft that made it to Australia  in the 1919 Great Air Race from London. A memorial, pictured left, now marks the hallowed turf where the Vimy first touched down in Australia on 10 December 1919.  The Parap Aerodrome closed in 1946, and the main runway has subsequently become a major road which is suitably named Ross Smith Avenue.

The Vimy arrived in Sydney on Valentine’s Day 1920, landing at Mascot Aerodrome.  While Mascot has subsequently become Kingsford Smith Airport, the major roads in and around the terminals are named after each of the Vimy crew.  Keith Smith Avenue services the approach to the domestic terminals and Shiers Avenue runs from the Sydney domestic terminals north to the Sydney suburbs.  Ross Smith Avenue provides the means for airport staff to reconnoiter the airfield perimeter (much as Ross would have done prior to each day’s departure en-route from London to Australia). There is also a Vickers Avenue at Sydney Airport in honour of the Vimy’s manufacturer.

The designers of Canberra’s western suburbs have payed due respect to the Vimy in their naming of the streets of Page. Although the suburb is bounded by the major roads of Kingsford Smith and Southern Cross Drive (reflecting the later achievements of the ‘other’ Smith), the suburb is bisected by Ross Smith Crescent. The crescent provides important access to the Page shops, and schools, and is essential to the life of the suburb.

The Melbourne suburb of Alphington, pictured below, is home to the adjacent streets of Ross Street, Bennett Street, Shiers Street and Smith Street. To mark the Epic Flight Centenary of 10 December 2019, neighbourhood residents came together in a local park for  the unveiling of a Vickers Vimy model created by a local aviation enthusiast. 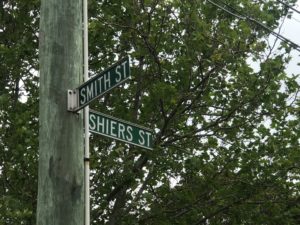 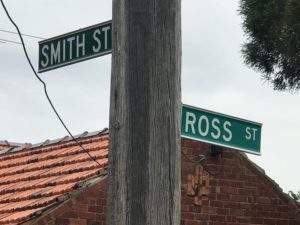 The Vimy arrived in Adelaide on 23 March 1920 and landed at the then Northfield Aerodrome, owned and operated by Harry Butler.  The aerodrome has long since disappeared and is now taken up by the inner-north suburbs of Northfield, Northgate, Lightsview and Oakden. 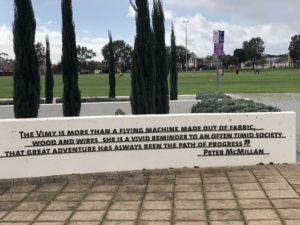 The development of Northgate in 2000 included the naming of key streets and a reserve in honour of the Vickers Vimy and her inspirational crew.  Vickers Vimy Reserve, pictured left, is a landmark in the suburb and provides aeronautical inspiration to those seeking leisure and recreation.  Both Vickers Vimy Parade and Shiers Avenue provide modern amenity for the residents of Northgate. 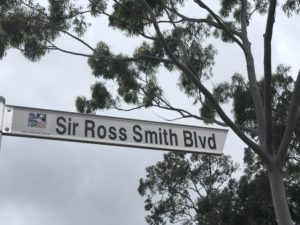 Oakden was established a few years earlier in 1993 and is immediately east of the Northfield Aerodrome site.   The main road, which winds through the Oakden estate and leads towards the old aerodrome site, is aptly named Sir Ross Smith Boulevard, pictured right.

Cedar College was established in Northgate in close proximity to the Vimy landing site, and has embraced this powerful history within its architecture.  The roof line of the buildings at Cedar College reflect the classic aerofoil shape, and this drives a narrative of exploration and discovery.  Indeed, the resource centre, which is the school’s technology hub adjoining the science wing, is topped by a triple-winged roofline. Inside is suspended a 1:20 scale Vimy model, built by one of the high school teachers with a small group of Cedar College’s inaugural students in recognition of the historic connection between the college and this aircraft.  Students still learn about the feat each year.

A trip to the cricket or footy at the Adelaide Oval brings you face to face with statues of champions of both games. Just to the east on War Memorial Drive, facing King William St and looking across the city to Mount Lofty, is a statue of Sir Ross Smith. Dawn is the best time to visit, before the streets are busy, and when you can image Ross completing his pre-flight checks and walking the airfield looking for any hazards that might affect his morning’s departure.

Streets, parks and reserves across Australia and overseas have been named in honour the Vimy and her crew.  You might live in Sir Ross Smith Drive, North Haven, SA, or know a bloke in Bennett Street, Bondi, NSW.  In a strange coincidence, Wally Shiers lived out the final years of his life in Bennett St, Hilton, SA until his death in 1968. This brief sojourn through Darwin, Sydney, Canberra, Melbourne and Adelaide features some important markers in the history of the arrival of the Vimy to Australia.  Explore for yourself and see the many places that reflect the past and give hope for our future.