William Ewart Hart was an early adopter of aviation in Australia and became the first person to qualify for his aviation licence on 5 December 1911. Like Ross Smith, Wally Shiers and Jim Bennett, he served with the Australian Flying Corps in World War I but was discharged within months due to injuries sustained in a plane accident back in 1912.

These photographs were supplied courtesy of the Garth family, who came across the images and William Hart’s Aerial League of Australia “No. 1” licence in an old suitcase bound for the dump. The originals have since been donated to the RAAF Museum at Point Cook, Victoria.  The photo top left includes, L-R: William Hart, Sir Keith Smith, NSW politician and theatre owner H.D. “Huge Deal” McIntosh, Light Horse commander Brigadier-General Charles Cox and Sir Ross Smith. It’s possible the photo was taken in February 1920 on the morning of Wally Shiers’ wedding, which was held in the garden of Mr McIntosh’s Sydney home. 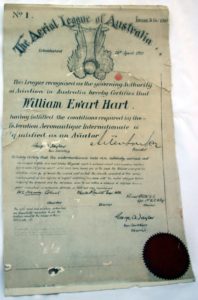 The first aviation licence granted in Australia (you can see the “No.1” in the top left corner). 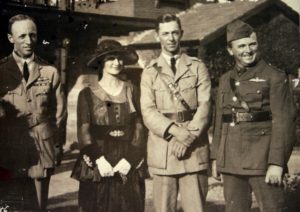 Sir Ross and Sir Keith Smith with William Hart and an unknown woman.