Round silver dish with domed base and wide horizontal lip. Writing engraved around the lip reads ‘TO LADY ANITA SMITH FROM THE CHAIRMAN AND DIRECTORS OF VICKERS LIMITED/ LONDON – ADELAIDE AIR RACE DECEMBER 1969/ 50TH ANNIVERSARY OF THE FIRST ENGLAND-AUSTRALIA FLIGHT’. Four silver makers marks are stamped opposite to the engraving, with a different Vickers logo stamped on either side, one signifying 1919 and the other 1969. ‘Made by MAPPIN & WEBB S94408’ is engraved on the underside of the dish, just below the maker’s marks. 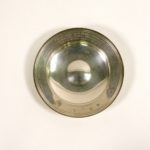 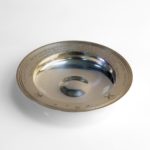