This limited-edition painting by Australian aviation artist David Marshall captures the scene of the Vickers Vimy flying overhead HMAS Sydney on 10 December 1919, en route to the Port of Darwin. A photograph of the painting was supplied courtesy of Vimy enthusiast David Caughey.

Dr John Stuart Dowie AM is best known for his sculptures which can be found in almost every Australian capital city. They’re also located in Mawson Base, Antarctica, Scheveningen in The Netherlands, the Australian Embassy in Washington DC, the University of Papua New Guinea in Port Moresby and Windsor Castle, London. Dowie’s home town of Adelaide is fortunate to have many of his works on public display, including the sandstone bas-relief honouring Sir Ross and Sir Keith Smith and their mechanics Wally Shiers and Jim Bennett. The sculpture, pictured below, was commissioned in 1957 ahead of the unveiling of the Sir Ross and Keith Smith Memorial at Adelaide Airport. It’s believed Dowie created this bust of Ross Smith as part of his preparations for the larger work. This image was supplied courtesy of the owner John Russell OAM. 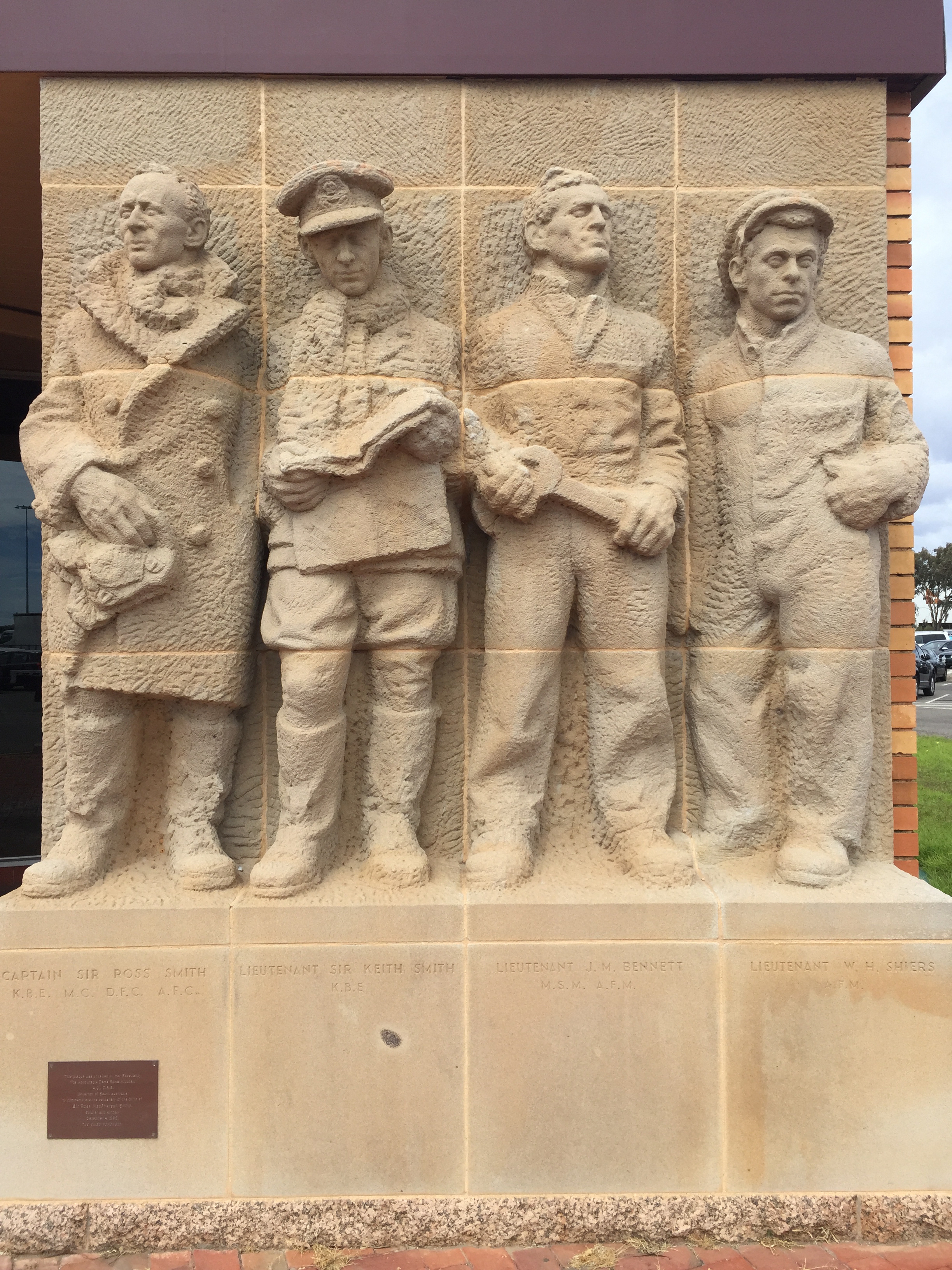 This portrait, entitled Lady Keith Smith, was painted on canvas by Australian artist Marion Jones in 1924.

Anita Crawford (nee Schmidt) had married Sir Keith earlier that year. She’d previously been married to England cricketer Jack Crawford. In Flick of the Fingers,
Crawford’s biographer Michael Burns describes the “talented and glamorous” Anita as a prominent figure in Roaring Twenties London. “She had her portrait painted by the distinguished Australian artist Marion Jones, she designed a collection of flapper-girl clothes for Adelaide’s fashionable ladies, and she was appointed the conductor of a Shakespearean orchestra …”

When Lady Anita died in 1986, she bequeathed her estate to the development of the Sir Ross and Sir Keith Smith Fund, which remains dedicated to encouraging the advancement of aeronautics and aerospace technology in South Australia.

This image was supplied courtesy of the painting’s owner, John Russell OAM.

Created by artist Janice Eames and sponsored by the RAAF Association (SA Division), this huge public artwork now graces the front hangar of the South Australian Aviation Museum in Port Adelaide. The feature photo, left, was taken on the night the Vimy mural was unveiled, accompanied by an Illuminart Show by projectionist Cindi Drennan. As part of the Northern Territory’s 2019 epic flight centenary celebrations, a fantastic new mural was created in central Darwin. Painted by local artists Jesse Bell and David Collins, the artwork can be seen at the corner of Bennett Street and Cavenagh Street.

Australian war artist Stuart Reid painted this oil on canvas in 1918, portraying the arrival of Ross Smith in his Handley Page bomber at a rendezvous point with Lawrence of Arabia in Palestine. The painting is held in the Australian War Memorial collection. Reference number: ART14279.

British sculptor Frederick Brook Hitch was commissioned to create the Sir Ross Smith Memorial after the aviator’s tragic death in 1922. The monument was unveiled at Creswell Gardens, Adelaide, on 10 December 1927, with the statue itself made from bronze sculptured in the image of Sir Ross dressed in his flying gear. Read the full story of the memorial on the SA History Hub. 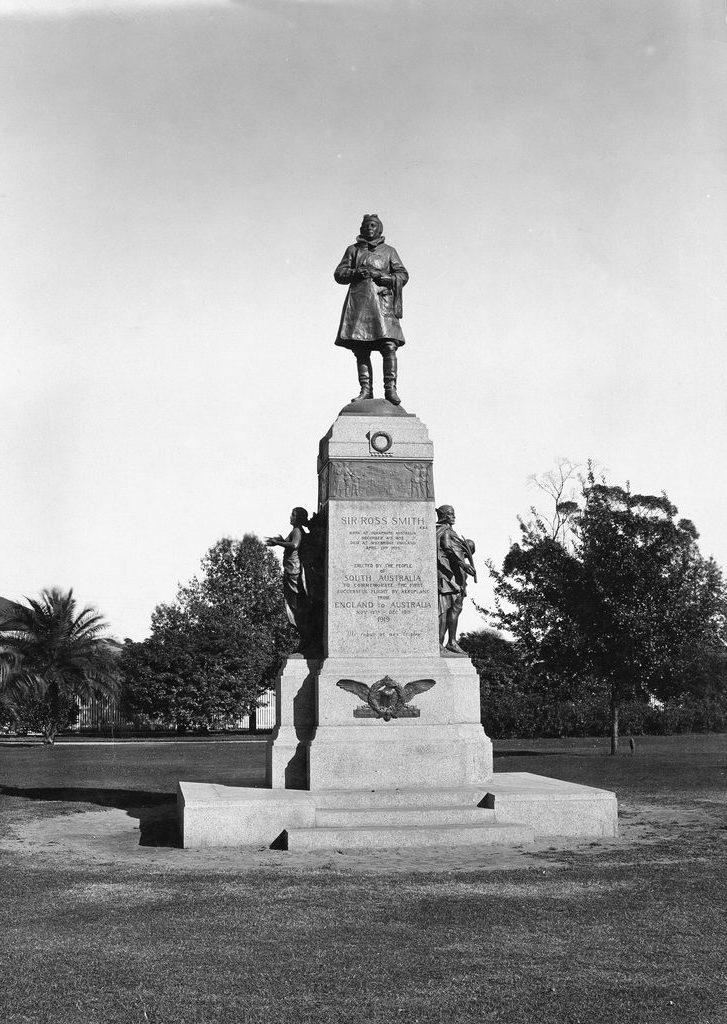 Image courtesy of the State Library of South Australia [SLSA: B-4974]

This W.B. McInnes oil painting of Sir Ross Smith was commissioned by the Commonwealth Government in 1920. Sir Ross sat for the portrait in August and September of that year, shortly before travelling by ship to England and after a lengthy stint on the speaker’s circuit around Australia. As Ross Smith biographer Michael Molkentin notes in Anzac & Aviator, McInnes portrays the famous airman “as weary and worn thin by four years of war, a flight halfway around the globe and six months living in the glare of publicity”. Molkentin also notes that Smith looks considerably older than his 28 years. The painting is held in the Australian War Memorial collection. [ARM ART03179].

This 1990 Norman Clifford oil painting captures Captain Ross Smith and Lieut. Cam Cameron in a Handley Page bomber over Palestine in WWI.  The painting is part of the Harry Hawker Collection held at the RAAF Museum, Point Cook, Victoria.

Artist Stefan Twaine-Wood, below, painted this Vimy mural in the late 1980s on hoarding designed to protect the Vickers Vimy from ultraviolet light in its hangar at Adelaide Airport. The hoarding eventually perished and the mural could not be saved. Feature image courtesy of Nigel Daw. 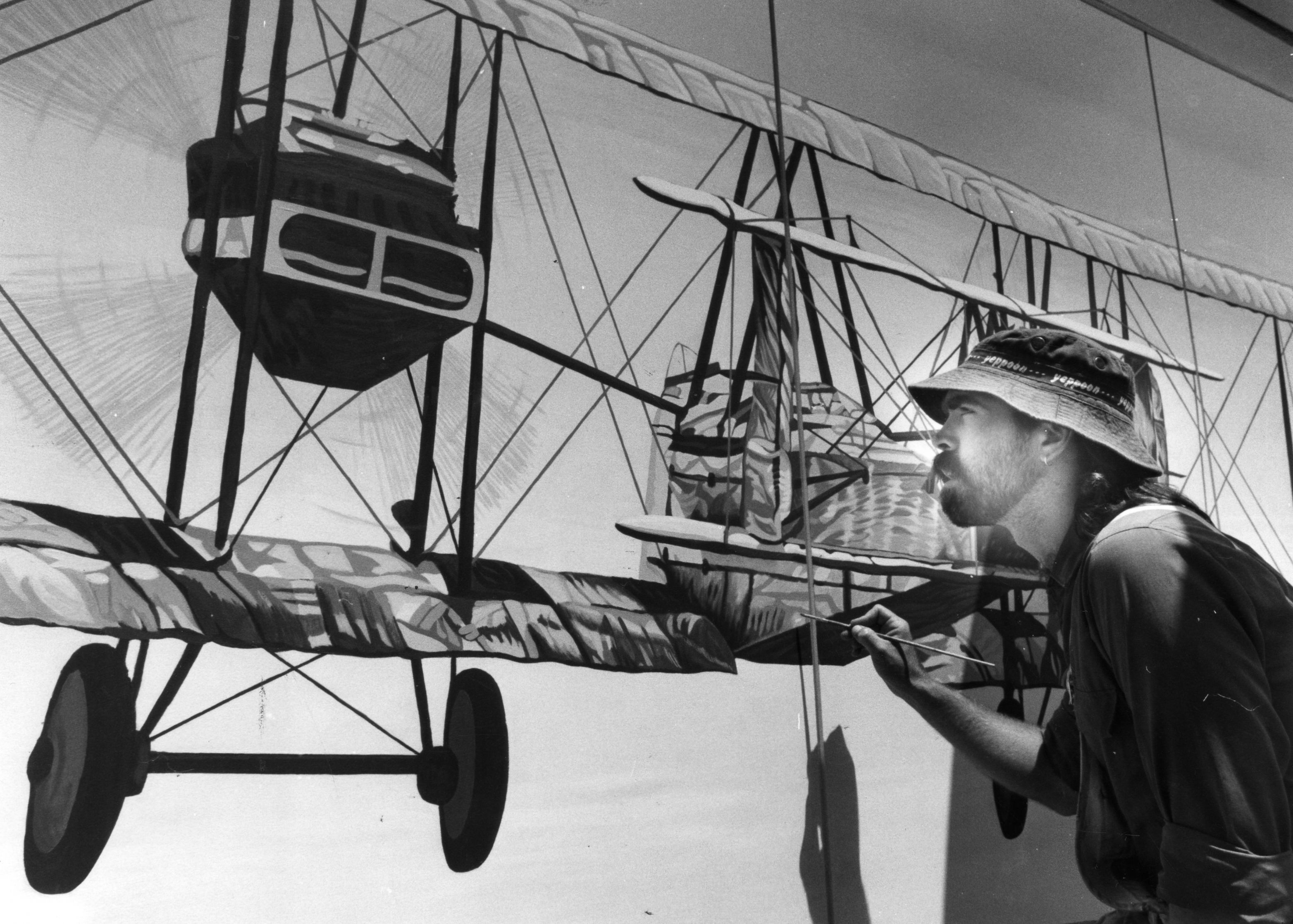 Artist Stefan Twain-Wood painting a mural on the Vickers Vimy memorial museum at the Adelaide Airport 18 Nov 1987. (Photo by The Advertiser staff photographer John Burdett.) Please note: this image is not to be republished without the permission of News Corporation.