Some of Australia’s leading institutions have commemorated the Epic Flight to honour the Vickers Vimy crew and other competitors in the 1919 Great Air Race from England to Australia. To celebrate the centenary of the pioneering first England to Australia flight by South Australia’s Smith brothers in 1919, the History Trust of South Australia has commissioned ‘Vimy Propeller’ – a special photographed limited edition of 50 framed, numbered artworks signed by the original artist, South Australian Gregg Mitchell. This commemorative medallion has been struck by The Adelaide Mint to celebrate the 100th anniversary of the pioneering flight. The copper/bronze medallion is available for $30 (GST inclusive) plus $3 postage in Australia. To order, visit the South Australian Aviation Museum.

Australia Post has commemorated the epic flight and first overseas airmail in the ‘Centenary of First England to Australia Flight’ stamp issue. The stamps, by Janet Boschen Design, include a domestic-rate and international-rate design. A prestige booklet has been released with the issue, delving further into this fascinating story. The Royal Australian Mint has released a set of eight coins in a collectible tin to commemorate the feat, including a special booklet telling the stories of danger, drama, and the unimaginable courage of the crews. The Great Air Race collection, celebrating the six Australian crews and also the French team led by Etienne Poulet, is available online for $130. Adelaide Airport Ltd has produced a ‘build-your-own’ pop-out Vimy carboard model. Suitable for ages five and over, the models are free and can be collected from the History Trust of South Australia registration desk at the Torrens Parade Ground, Adelaide, or at the South Australian Aviation Museum in Lipson St, Port Adelaide. 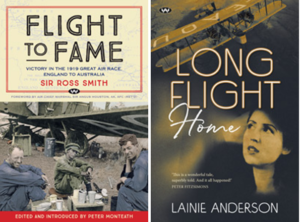 South Australian publishing house Wakefield Press has released two books for the centenary. Flight to Fame, a reprint of Sir Ross Smith’s 1922 memoir 14,000 Miles Through The Air, is edited and introduced by Adelaide historian Peter Monteath. Long Flight Home by Lainie Anderson is an historic fiction which tells the story of the Great Air Race through the eyes of Ross Smith’s mechanic Wally Shiers. Drawing on the rich and extensive collection of Ross Smith’s private papers, Anzac & Aviator tells—for the first time—the gripping story of a remarkable aviator, the extraordinary times in which he lived and the air race that changed the world. Anzac & Aviator is written by award-winning aviation history writer Michael Molkentin and published by Allen & Unwin. 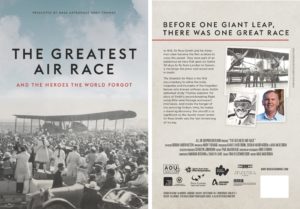 The Greatest Air Race is the first documentary to relive the trials, tragedies and triumphs of the forgotten heroes who braved unflown skies in the race from England to Australia in 1919. NASA astronaut Andy Thomas explores the story of Ross Smith’s record-breaking flight using little-seen footage and expert interviews. And inside the hangar of the surviving Vickers Vimy, he makes a stunning discovery: the aircraft is as significant as the Apollo moon lander. Sir Ross Smith was the Neil Armstrong of his day. Running time: 54 minutes. View the trailer.  www.thegreatestairrace.com/shop